You are here: Home » About » Mission, Vision & History

To build an inclusive community where Torah guides us to engage in lifelong learning, repair our community and the world, embrace our heritage and the rhythms of Reform Jewish life, cherish our relationship with God and affirm our love for the land and people of Israel.

If you want to learn more about how we govern our synagogue please check out the following documents:

Anshe Emeth is a spiritual, vibrant and welcoming community that inspires us to lead a fuller, Jewish life. 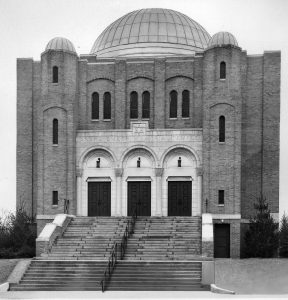 The congregation grew steadily through the decades, providing leadership to the local Jewish community and the city of New Brunswick. In the 1970’s, at a time when many urban congregations were following the migration of Jewish populations to the suburbs, the members of Anshe Emeth voted to remain in New Brunswick and participate in the city’s growth and renaissance. Anshe Emeth, the oldest synagogue in Middlesex County, is also the oldest synagogue in New Jersey to still be located in its city of origin. Currently, Anshe Emeth serves families living throughout the county, as well as surrounding counties in Central NJ, with a great variety of opportunities to celebrate Jewish life, including Sabbath and Holiday worship and activities, a religious school spanning Pre-K through 12th Grade, an extensive offering of adult education programming, and a full-day Early Childhood Education Center.

Since 1930, the Temple’s building has expanded, as well as the programming which is dedicated to improving life in New Brunswick. Over the years, Temple members have rolled bandages during World War II, and had a similar program later for cancer patients needs; established a reading program at the Redshaw School (next door to the Temple); substituted for staff members at the local hospitals on Christmas Day; regularly staffed the kitchens at Elijah’s Promise; and with New Brunswick’s Interfaith Overflow Men’s Shelter, provided a safe place three weeks every winter for homeless men to spend the night. The Temple’s most recent innovation is the Anshe Emeth Community Development Corporation, which offers both a free medical equipment loan service, and legal advice to Middlesex County’s low-income families. In addition, the CDC’s “Bebe Bell” lends car seats and baby furniture, as well as donating formula, diapers, and other essentials, to mothers without sufficient resources to provide these items for themselves. The congregation maintains a warm relationship with other houses of worship in New Brunswick, celebrating with them annually at an Interfaith Thanksgiving Service.

The latest additions to the Temple’s building provide an amphitheater, a modern media center with books, computers, and expanded facilities for the preschool center, a beautifully renovated sanctuary, housing for the archives of the Jewish Historical Society of Central Jersey, and several new rooms for meetings, classes, and social gatherings. At a time when many houses of worship are closing their doors or having to combine with others in order to survive, Anshe Emeth mounted a successful capital fund drive to secure all the needed additions and renovations, and now has a thriving program of Judaic importance which enriches the lives of so many people.