A few weeks ago I went on a great journey with our Temple’s Youth Group and I just have to share with you some of what we witnessed together. We found a community with a very similar history to Anshe Emeth’s but with a “Vermont Twist.” We journeyed up to Burlington, Vermont and studied with some of the professors at The University of Vermont to learn about the immigrant population and their history in the area.

We shared stories with them about modern day refugee resettlement efforts that both our institutions are involved in and we found that both Burlington and New Brunswick were areas that traditionally housed new immigrants to America, and this included the Jews as well. We asked, “How did Jews end up in Burlington in the 1880s” as they similarly asked, “How did Jews end up in New Brunswick in the 1860s.”

We toured the streets of “Little Jerusalem” in Burlington that looked remarkably like the streets of New Brunswick that Jews, a century ago, called home. We found ourselves in front of Burlington’s original synagogue, Ohavi Zedek (“Lovers of Justice”) that was built in 1887 by a group of itinerant peddlers from Cekiske, Lithuania (outside Kovno). The building looked like it could have been based off of what our original building may have looked like before moving down Livingston Ave. Their congregation has since relocated but what they took with them was remarkable.

We traveled to the other side of town to visit with what felt like our sister congregation to meet with present day members about a living remnant of a by gone era. We met with Aaron, who is heading up an effort to restore “The Lost Mural.” 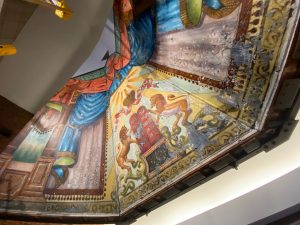 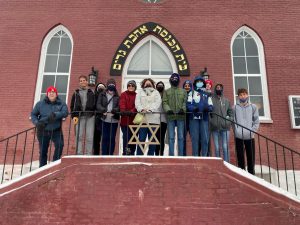 You see, in 1889, the tiny Jewish community (150 residents) built a second synagogue, Chai Adam (“Life of Man”), within 500 feet of the first. The wooden synagogue included a unique second story Victorian turret with a pitched slate roof, situated above the ark. In 1910, this interior space would become home for a unique mural painted by a Lithuanian immigrant artist, Ben Zion Black. It was in the style that littered Jewish synagogues across Eastern Europe, but would later become lost to the Holocaust. 110 years later, this mural would be one of the last remnants of a by gone era. This second break off congregation would later rejoin Ohavi Zedek and after many campaigns and endeavors the mural is now living at the congregation’s current address waiting for one last financial campaign to be completed before it can be fully restored. You can learn more about the endeavor at https://www.lostmural.org

We all had a great time on the trip and one of the takeaways that a teen shared with me right before jumping on the ski lift (because when in Vermont do as Vermonters), “I realized this weekend that being part of a synagogue is less about having a place to pray, but having a home to call your own. To be part of a larger family that helps connect you to other Jewish families. I had never heard of the synagogue in Burlington before now, but I now feel connected to them. It’s like I met a family member I didn’t know existed. Anshe Emeth does so many special things and I’m so proud to be a part of this community.”